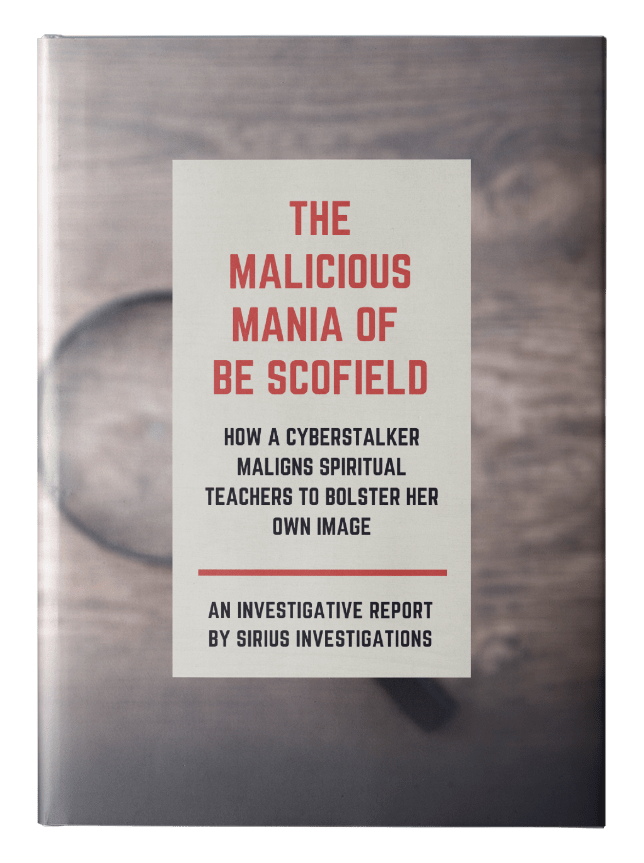 Before you start reading the report, we recommend listening to this Interview with Aaravindha on cyber hate, online defamation and the investigation on Be Scofield

The Malicious Mania of Be Scofield

How a cyberstalker maligns spiritual teachers to bolster her own image

The Background of This Report

This is a report on how "journalist" Be Scofield maliciously framed spiritual teacher Aaravindha Himadraha, written and is presented by Sirius Investigations, a licensed private investigation company with more than a decade of experience. We were hired to investigate the methods used by Be Scofield, who promotes herself as a professional journalist and courageous “cult hunter.” Our investigation revealed that Scofield engages in deceptive practices by using a wide variety of names and email addresses, and by posting her articles on multiple self-owned websites, all to make herself seem like a credible reporter. Scofield repeatedly writes about herself in the third person as if a separate entity were praising her work. Be Scofield also regularly violates copyright laws, threatens those who disagree with her, and has routinely posted malicious gossip instead of doing the work of investigative journalism.

The role of a professional private investigator is to find the truth. It doesn’t matter who is paying the bill or whether we like our clients or the people we are investigating; we do our best to talk to all parties and determine what actually happened. We don’t edit the facts. We don’t advocate for one side or the other. We strive to present logical conclusions based on factual evidence and interviews as if we’re preparing for a court case. That’s the job.

In 2019, Be Scofield published an article on her website that falsely linked a spiritual leader named Aaravindha Himadra with the death of a woman, Carla Jean Shaffer, thirteen years earlier on Orcas Island. Due to the damage caused by Scofield’s libelous article, Sirius Investigations was hired to reveal the truth.

The Conclusions of Our Investigation

In late 2018, Be Scofield set out to accuse a man she’d never met of committing horrific crimes during events that happened in 2005 and 2006. Even before doing any investigation, Scofield admitted this intention in an email message to the local county prosecutor. In early 2019, Scofield published a malicious article, “Aaravindha Himadra and the Mysterious Orcas Island Death of Carla Jean Shaffer,” on her own website, and then promoted it via other websites she owns and via her own Facebook page.

After six months of steady in-depth research and analysis, our investigation came to the same determination that several law enforcement agencies, as well as the coroner and prosecuting attorney, and the medical examiners had concluded long ago: absolutely no evidence exists that any crime had been committed.

Based on our research into the police reports, the medical reports we obtained, and our investigator’s interviews of Orcas Island residents knowledgeable about the events, we found no connection between Carla Shaffer’s death and Aaravindha Himadra. Be Scofield’s insinuations were both intentionally harmful and highly defamatory.

The allegation that Himadra had been involved in Carla Shaffer’s death was the result of Be Scofield’s deceitful attempt to create a sensational story where, in fact, there was no motivation, opportunity, or evidence of his involvement. The events of late 2005 that Be Scofield insinuates Himadra was responsible for occurred when he and his wife were in Europe for two months on a teaching tour.

Be Scofield requested and received police and medical records, yet she clearly ignored and avoided including all the evidence that showed Aaravindha had no involvement in Carla’s death. She recklessly set out to frame an innocent man of a crime that didn’t happen.

Our investigation showed that Be Scofield relentlessly promotes herself as a self-styled “cult hunter.” Scofield’s unfounded attack on Himadra is only one of many similar attacks she has carried out on prominent spiritual teachers. Scofield’s methodology seems to be to target a spiritual teacher, gather any salacious gossip (regardless of its credibility) that might support the evil-cult-leader accusation she intends to make, ignore inconvenient facts that don’t support her goal, and then fabricate scandalous, unsubstantiated accusations and distribute them as widely as possible on the internet.

In keeping with her standard practices, Scofield accused Himadra of running a dangerous cult. Our investigation determined this allegation to be a complete fabrication, invented and publicized by Be Scofield to create a false air of sinister suspicion. No cult has ever been associated with Aaravindha Himadra.

The real crimes committed and perpetrated by the publication and promotion of the article were carried out by the attention-hungry, self-ascribed “guru basher,” Be Scofield. She used the tragic death of an unfortunate, psychologically unstable woman as an opportunity to invent a smear story that would attract more online attention to her “cult-hunter” persona she intends to present to the internet world.

Scofield’s article and her subsequent actions have done severe damage, stirring up purposefully misdirected anger and false suspicions in an otherwise pleasant, peaceful community on Orcas Island. Aaravindha Himadra and his wife Ashayrah have also suffered serious injury to their personal and business lives. Due to Be Scofield’s actions, the couple has received death threats and damage to their personal property, as well as damage to the property of a colleague.

The following sections will describe how Be Scofield strategized and perpetuated this heinous, ongoing attack against Aaravindha Himadra, and how she continues to attack spiritual leaders around the world using lies and innuendo to promote the reputation she has invented for herself.

Other articles Related to Be Scofield's cyber attacks

Is Be Scofield Qualified to Assess the Legitimacy of a Leader?

In “Cult Mania: Inside the Attack on Bentinho Massaro: Part 1,” author Alexander Vera turns a critical eye to an article by Be Scofield, who claims to have successfully “infiltrated” the Arizona-based spiritual movement led by Bentinho Massaro. The author END_OF_DOCUMENT_TOKEN_TO_BE_REPLACED

Toxic Journalism of Be Scofield

In a post to his website, John L. Baxter describes what he calls Be Scofield’s “toxic journalism.” Scofield, he asserts, has written articles under the guise of journalism that meet the technical definition of libel: “published, broadcast, or digitized, online END_OF_DOCUMENT_TOKEN_TO_BE_REPLACED

Scapegoating at Its Finest?

A Facebook post by spiritual leader Bentinho Massaro provides a “recommended perspective” on what Massaro describes as “cheap tricks” practiced by self-described journalist Be Scofield, who insinuated herself into Massaro’s community and later published an article that Massaro and his END_OF_DOCUMENT_TOKEN_TO_BE_REPLACED

Be Scofield: The Opposite Effect

Response to Rumours and Allegations about Mooji, the Sangha and Monte Sahaja Ashram in Portugal, is a response to Be Scofield’s defamatory article about the spiritual teacher, Mooji. Written by his team, it opens by thanking readers for the outpouring of END_OF_DOCUMENT_TOKEN_TO_BE_REPLACED

Culture or Cult – Be Scofield

Robert B. writes about self-described journalist Be Scofield for Culture or Cult. He describes Scofield as a “wily” operator who uses “a variety of aliases” to disguise her activities and evade legal sanction for her work. B. asserts that Scofield END_OF_DOCUMENT_TOKEN_TO_BE_REPLACED

What are the Motivations of Be Scofield?

In “Comments about Be Scofield article, ‘The New Predator: Spiritual Teacher Padma Aon Prakasha Accused of Abuse,’” first published on Divine Truth Van, the author describes Scofield’s article as “radically sensationalized” and claims that they “did not give permission for END_OF_DOCUMENT_TOKEN_TO_BE_REPLACED

Does Be Scofield Use a Double Standard?

In “The absurd whiteness of Be Scofield,” an article posted to Free Thought Blog, the anonymous author accuses Be Scofield, the self-described “toxic spirituality” watchdog, of unfairly libeling New Atheists as “flaming racists.” The author argues that Scofield uses a END_OF_DOCUMENT_TOKEN_TO_BE_REPLACED

A Package of Salt with Be Scofield

This Reddit thread includes comments about pseudonymous author Robert B.’s “Culture or Cult” article on self-described journalist Be Scofield, who he accuses of libeling various spiritual leaders and their followers. Robert B., a clinical psychiatrist, asserts that Scofield exhibits sociopathic END_OF_DOCUMENT_TOKEN_TO_BE_REPLACED

Be Scofield and Balanced Journalism?