What Motivates Be Scofield?

A perusal of Scofield’s gurumag.com and bescofield.com websites and blog posts demonstrates that she is determined to promote herself as the authority on spiritual leaders and especially cults. She never writes a positive post about anyone except herself. How and why Scofield became such a critical, negative force may never be known, but it seems peculiar that a “queer/transgender” individual who lives such a strange, nomadic, cultphobic life is so easily enraged by non-traditional spiritual groups and considers it her mission to take them down.

In her articles, she often cites praise of spiritual leaders from their followers as evidence of mind control. Is it envy because she wants to be “the guru”? Or is it simply that Be Scofield believes she’s capable of discerning what’s happening in the minds of others much better than they can?

Be Scofield often claims to be defending her First Amendment rights, while denying everyone else’s. Here are the 45 words that make up the First Amendment to the US Constitution:

Congress shall make no law respecting an establishment of religion, or prohibiting the free exercise thereof; or abridging the freedom of speech, or of the press; or the right of the people peaceably to assemble, and to petition the Government for a redress of grievances.

Scofield has no respect or tolerance for anyone else’s spiritual beliefs. If she doesn’t approve of what others are saying or doing, she attacks. If there’s any kind of group that gathers to listen to a spiritual teacher, she automatically declares that group to be a cult and the teacher to be abusive. This is disturbing, because Scofield herself has in the past posted a lengthy description of her own magical “Kundalini awakening” on her Facebook page. Apparently, if Be Scofield believes in a spiritual practice, it’s valid. If she doesn’t, it’s a cult.

Jennie Joplin, Carla’s friend who accompanied her to the hospital after Carla’s self-inflicted stabbing, told our investigator that she (Joplin) had talked to Be Scofield for hours. During that conversation, Joplin said she told Scofield unequivocally, “Aaravindha had nothing to do with Carla’s stabbing or later death.” However, Joplin reported to us, Scofield still wanted to find a cult, “even if she had to make one up.”

We don’t all believe the same things that our neighbors do. Even traditional religions have major disagreements in what they believe and teach. But even if we think that some beliefs are bizarre or illogical, that does not give us the right to accuse those followers of major crimes. Be Scofield apparently believes she has a divine right to judge others, even with no evidence to back up her accusations. 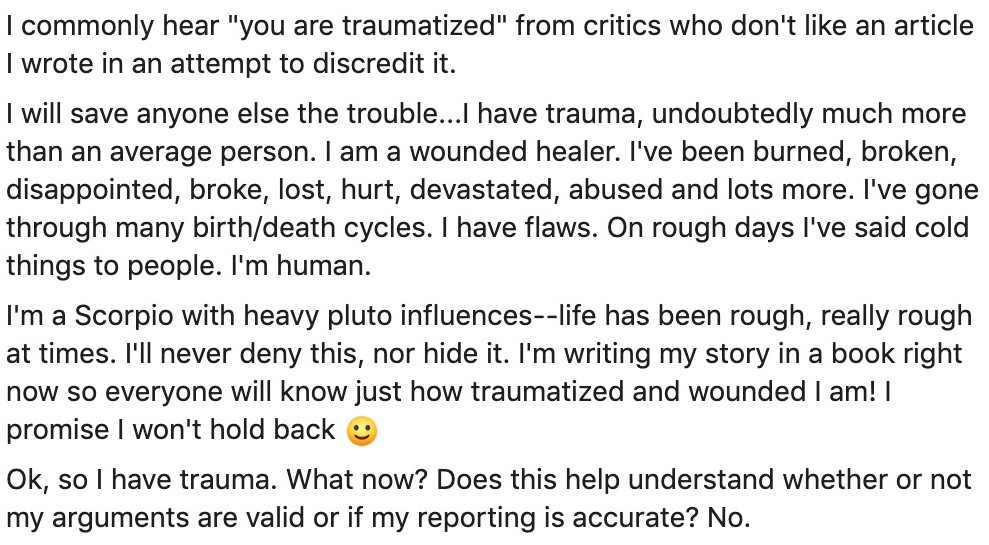 Notice how it’s all about Be Scofield. Always. But whether or not Scofield “has trauma” (much more than an average person, of course) is irrelevant. She uses the phrase “wounded healer” frequently, needing to always portray herself as valient and generous. An old trauma might go a long way to explain why Scofield does what she does, but it’s not an excuse to attack others to make herself seem important.

In this Facebook post, Be Scofield went on to say that she is “open to feedback, vigorous debate, and disagreement about her ideas and even behavior.” Nothing could be further from the truth. Just ask anyone who has actually had contact with her. People we interviewed on Orcas Island told our investigator that Scofield refused to listen to anything they had to say and she was totally self-absorbed and determined to write a “juicy” story, no evidence needed.

Scofield is absolutely correct that her history does not help us to understand whether her arguments are valid or her reporting is accurate. Frankly, we don’t care what she may have experienced in the past. As professional investigators, what we object to is the lack of logic in the way Scofield combines unrelated elements to insinuate wrongdoing, her lack of investigative reporting, and her dismissal of information verified by others. Scofield rarely names sources, and discounts any data she comes across that doesn’t fit the narrative she wants to tell.

Be Scofield is neither a journalist nor a reporter. At best, Be Scofield is an essayist telling the world her opinion. At worst, she’s a vicious gossip columnist and a cyberstalker.

Be Scofield’s writing shows all the signs of narcissistic personality disorder. Here’s a general description of the condition from the Mayo Clinic, the most highly esteemed medical center in the United States:

Narcissistic personality disorder — one of several types of personality disorders — is a mental condition in which people have an inflated sense of their own importance, a deep need for excessive attention and admiration, troubled relationships, and a lack of empathy for others. But behind this mask of extreme confidence lies a fragile self-esteem that’s vulnerable to the slightest criticism.

And here’s a list of symptoms from the same site:

Signs and symptoms of narcissistic personality disorder and the severity of symptoms vary. People with the disorder can:

The site goes on to say that people with narcissistic personality disorder have trouble handling anything they believe as criticism, and can:

Be Scofield constantly exaggerates her own reputation and abilities, is unwilling to listen to anyone else, and uses multiple websites (especially gurumag.com and bescofield.com) and invented personalities to make herself look famous and important. Add in her claims to be above the law and her threats to anyone who opposes her, and it’s easy to see that Scofield fits the disorder well.

It should disturb every rational person that Be Scofield was willing to insinuate that Aaravindha Himadra might be guilty of murder when the authorities who investigated had concluded that no crime had been committed.

When Be Scofield claims to be an authoritative investigator but continues to publish, advertise, and perpetuate malevolent gossip, irrational conspiracy theories, and false accusations on the internet, that should outrage us all.

We tried to investigate the motive behind Scofield’s behavior, but did not discover the reasons she seeks to wreak havoc and inflict pain in people’s lives. People who have met her have been reluctant to talk to us, or outright refused, because they fear her vindictive cyber-bullying attacks. Scofield seems desperate to be seen as a heroic savior, intent on building her own cult of hate to attack spiritual groups.

How does she continue to get away with it? Is it because we live in an era of “fake news” where some people simply present whatever story they want, and others are eager to believe every accusation is the truth?

Who is Be Scofield’s next target?